All Basis Vectors are not Equal

In the introductory last post on Singular Value Decomposition, I had demonstrated with examples how we can describe our data more efficiently with the help of SVD. In essence, instead of describing our data using the standard Cartesian Coordinate system, we instead used another Orthonormal Basis - the one given by the \(V\) matrix in the output of SVD. We saw how this particular Basis allowed us to convey a significant amount of information about data, by just using the first few Basis Vectors.

In other words, unlike the Cartesian Coordinate system, the SVD Orthonormal Basis comes with a heirarchy of Basis Vectors. Some Basis Vectors (such as the First Singular Vector) pack in a lot more information than the others. In this post, I will attempt to use this fact to gain more insight into Ridge Regression. The idea is borrowerd from Section 3.4.1 of the book The Elements of Statistical Learning by Hastie, Tibshirani, and Friedman. The book is incredibly densely packed with insights, and I highly recommend it.)

While you can always go to the book to view the key insights, in this post my aim is twofold:

As with the previous post, I have created a companion python notebook which replicates the examples used in this post. Before we discuss Ridge Regression, let’s spend some more time on the ‘heirarchy’ of SVD Basis Vectors.

How do some Basis Vectors pack more information?

Toy Example for Intuition: Say we’ve been given 100 samples of two variables \(X_1\) and \(X_2\), which we need to use to build a prediction model for some quantity \(y\). But suppose we know that \(X_2\) is simply \(X_1\) plus some standard Gaussian noise. Clearly in this case there is no benefit to be received from using both \(X_1\) and \(X_2\) in our model - one of the two variables captures all the information that exists.

In the Figure below, we plot \(X_1\) vs. \(X_2\) (the green points), and we see that the First Singular Vector (the black line), points in the direction in which we are able to capture bulk of the variance between our 100 sample points. The Second Singular Vector (the orange line) only seems to be explaining variance due to the standard Gaussian noise. Intuitively, lengths of projections of the green points on our black line ‘vary a lot’, whereas their projections on the orange line seem to be contained within a narrow range of \([-1, 1]\), seemingly because of our standard Gaussian noise.

P.S. In an Appendix towards the end of this post , I will prove a result stated in ‘The Elements of Statistical Learning’ which will quantify the variance captured by any Singular Vector.

How does this relate to a Prediction Problem?

In a typical prediction problem, our task is to train a model which can predict some ‘target quantity’ (such as weight) or ‘target label’ (risk of heart attack - high, medium, or low), given values of ‘predictor’ variables (such as age, gender etc.). If we are able to discern between our ‘predictor’ variable samples, we will more clearly be able to ‘see’ the relationship between those variables and the ‘target’.

Let us understand this with the help of the Iris dataset in which we are given 150 samples of four Predictor variables - the lengths and widths of sepals and petals - and we need to classify a sample into one of three species of Iris (Setosa, Virginica, and Versicolor).

Armed with some intuition into how Singular Vectors capture variance within a set of points, let us now apply that to analyzing Ridge Regression.

This can be stated in matrix notations as:

This is a convex optimization problem, and its solution (i.e. the value of \(\beta\) which minimizes the sum of squared erors) can be found analytically:

Note: One can see from \(Eq. 1\) that this solution exists only when the matrix \((X^{T}X)\) is invertible. For this to hold true, it is enough that \(X\) has full column rank (see Appendix below for my proof). If you do not understand this Note, it is okay, and for now just assume that the solution in \(Eq. 1\) exists.

We are trying to solve the same prediction problem as we were for Linear Regression above, i.e. we assume that a linear relationship exists between \(y\) and \(x \in \mathbb{R}^{n}\) parametrized by some \(\beta \in \mathbb{R}^{n}\), which we are trying to estimate from \(m\) samples. When doing Ridge Regression we introduce a slight tweak to the Objecive Function - the optimization problem now is:

Now we are trying to minimize the sum of (1) sum of squared errors, and (2) square of length of our parameter vector. Intuitively, we are saying that we want to find a \(\beta\) which reduces the sum of squared errors, but which is itself not too large a vector. We express our preference for how ‘small’ we want \(\beta\) to be through our choice of the ‘hyperparamter’ \(\lambda\).

But why do we want a ‘small’ \(\beta\) vector? How does this small \(\beta\) differ from what we get from Linear Regression in \(Eq. 1\)? Answering these questions is the goal of this blog post, and SVD is going to help us gain some insights.

As it turns out, Ridge Regression also has an analytical solution given by:

Let me get started by restating the magic result from Section 3.4.1 of The Elements of Statistical Learning:

Note: This result is proved in the book in three lines, however I am going to elaborate on the proof in Appendix (1) below so that every intermediate step which is not in the book is clear to the reader.

To understand this magic result, let’s see what this implies for the case of simple Linear Regression (i.e. when \(\lambda \space = \space 0\)): 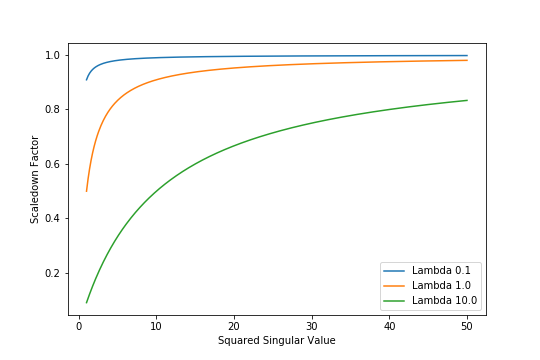 Now our model’s predictions are:

Consider the scalar quantity \(y^{T}(X^{T}X)y\). It can be written as \((Xy)^{T}(Xy)\). Written this way, it now represents the squared length of the vector \(Xy\). This squared length is non-negative for sure.

If matrix \(X\) has full-column rank, then its Null Space only contains the zero vector. This implies that squared length of vector \(Xy\) is always greater than 0 \(\forall y > 0\). In other words, the matrix \(X\) is Positive Definite and therefore invertible.

Quantifying the Variance captured by a Singular Vector